Don Stevens, MD, gives back to his community in many ways 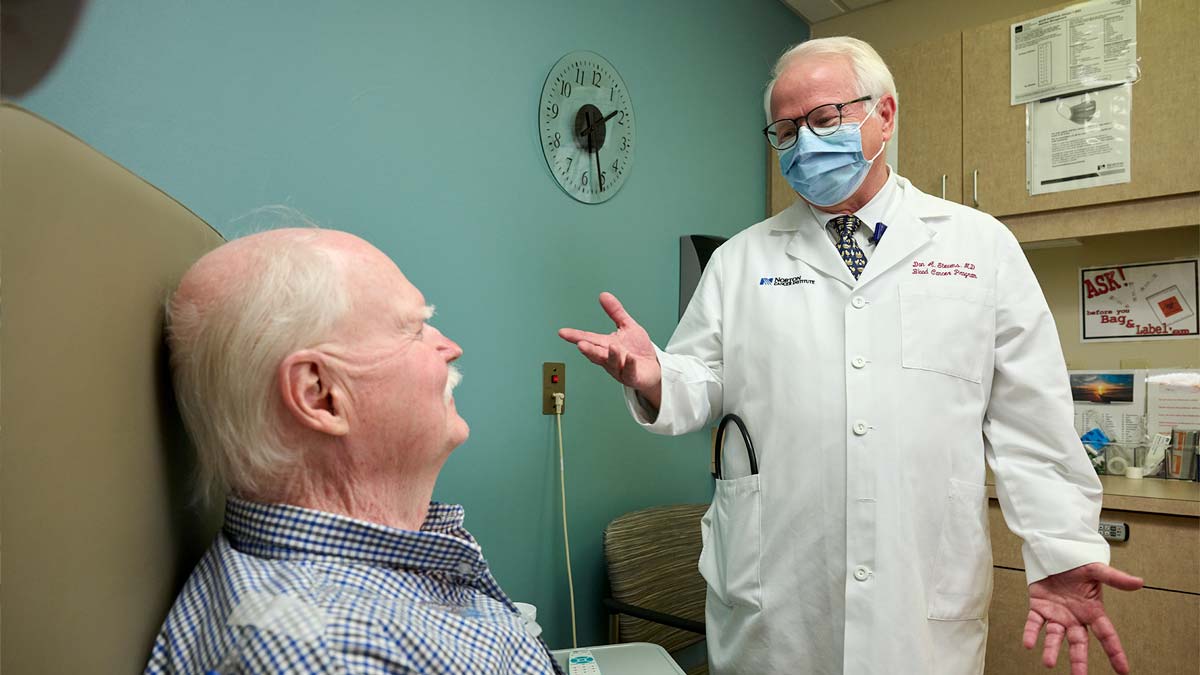 LOUISVILLE Cancer care can be a long-term relationship between patient and physician. Don A. Stevens, MD, says, “Most of us in this field feel a connection with our patients and know that they’re going through a very horrible time and we’re doing what we can to make that better, hopefully having the opportunity to develop long-term relationships with them.”

Stevens also has a long-term relationship with his hometown of Louisville. He is a board certified hematologist/medical oncologist at Norton Healthcare and one of the founding members of the Norton Cancer Institute. He grew up in the Highlands neighborhood of Louisville and graduated from Georgetown College in Georgetown, Kentucky and the University of Louisville School of Medicine. He followed that with a fellowship in medical oncology at the prestigious Johns Hopkins Hospital in Baltimore.

Stevens recalls, “Before we actually used the words Cancer Institute, we had already grown to be multiple multidisciplinary providers that included radiation oncology, GYN oncology, and orthopedic oncology and more. Since then, we’ve added the treatment spectrum for all cancers, from prevention, genetic assessments, survivorship, all very inclusive and very expansive services for the community. It goes back to many years ago when the board of trustees at Norton Healthcare and the administrative leadership made a decision to put resources in and develop that program. Over $100 million in the first five years alone.”

“Until we are curing every patient, we need to continue to have clinical trials to advance cancer care.” — Don Stevens, MD

Kentucky has high rates of cancer, unfortunately leading the nation in many areas. Stevens says that’s one of the motivations for devoting resources to cancer care. In conjunction with treating patients, Stevens is currently the lead or sub investigator in around 65 clinical trials. He says that “until we are curing every patient, we need to continue to have clinical trials to advance cancer care.”

“The most exciting thing that we’re doing now is using autologous cellular therapy, cells that come from the patient. The cells are harvested in a process called apheresis, similar to having platelets donated at the blood bank. We think of these cells as being drugs. We have helped some cellular therapies become FDA approved, and we can offer those now that the clinical trials are complete,” says Stevens.

“Because of clinical trials, we are treating cancer so much differently than we did when I started. And that’s a good thing,” he states.

Leukemia and lymphoma are two cancers that Stevens specializes in. He’s conducting trials where a healthy patient’s cells are shipped to a laboratory where they are genetically engineered to fight the lymphoma or the leukemia cells and then returned for infusion into the patient. But even more exciting, says Stevens, is that they have several studies now using what are called allogeneic cells. “These are cells that come from a donor and some of them, but not all, are genetically engineered to fight specific proteins on the surface of the cancer cell. We call these ‘just off the shelf cells’ because they’re really just out of the freezer. We go to the freezer, thaw the cells and infuse them into the patient. This allows us to treat more patients with cellular therapy. It also allows us to get the cells into the patient faster. And in some cases, it allows for re-dosing.”

Not all of the allogeneic cellular therapy that Stevens is working on is FDA-approved, but he has three or four studies open at any one time. He’s also continuing to look at very targeted therapies. For example, he is investigating a drug that specifically degrades a protein that’s important for the cancer cell to survive—a very targeted protein destruction.

Not only does Stevens see patients and conduct drug development trials, but he also has cooperative group trials with Hodgkin lymphoma. This is a trial that’s being done across the country that seeks to compare two different chemotherapy regimens or recipes that use different immunotherapy. And that’s exciting for Stevens because, as he says, “We can offer clinical trials to somebody in Boston, New York, or Miami, where they would have the same clinical trial option for their Hodgkin lymphoma as we do here at the Norton Cancer Institute.”

Most of Stevens’ research has to do with treatment. He says that continuing to exploit the information that he’s learned from studying the molecular biology of malignancy and translate that into very targeted therapies keeps him highly motivated. “The advantage of a targeted therapy is you don’t have all of the side effects that you would with something that’s not targeted. So literally for decades, the drugs that we’ve used have not been smart drugs. That’s why we have the side effects that some people associate with cancer treatment. We’re seeing fewer side effects, and we’re treating more patients, and we have more options because of clinical trials.”

The EMR Advantage in Clinical Trials

Electronic medical records, which are now a staple of hospital and medical offices, also enhance clinical trials, says Stevens. “It certainly helps us to follow patients more efficiently as they go through their trials and treatment.”

A prime example is next generation sequencing, explains Stevens. “We can send blood or a sample of a tumor and have it screened for literally hundreds of different mutations. And that’s what identifies the targets for therapy. We can take a few cancer cells and literally look for 400 or 500 different mutations that may be contributing. We can look at the ones that are there and that helps us choose what therapy or what clinical trial would be best for that patient.”

Stevens emphasizes that participating in clinical trials is important. It does several things that are positive. It frequently opens up treatment options for patients that would not have options. It allows clinical staff to become familiar with treatments and medications well in advance of FDA approval. “Our national guidelines state that clinical trial participation is encouraged for every patient, as long as the trial is appropriate for that patient,” says Stevens.

An important part of cancer care is the team approach. Stevens says it’s vital that Norton Cancer Institute has a caring, competent team in place for the patients, from the providers, to nursing staff, to the pharmacy staff. “We have to approach cancer care as a team. It’s about patient education, because knowledge is power. The more we can educate our patients, the better decisions they’re going to make, the less fear they’ll have, and the more confidence they’ll have in the decisions they’ve made.”

“In 1994 we started with four physicians and now we have over 30 oncologists including medical, radiation, gynecologic, orthopedic, and dermatologic. We continue to expand the depth and breadth of our research and care. I can’t praise Norton’s enough, from the board of trustees to our administrators, they recognized the need many years ago, and they have dedicated the resources to make this what it is today,” says Stevens.