LOUISVILLE The recipient of the 2018 Honorable Maestro Award, awarded by the Kentucky Chapter of the American College of Cardiology, will be University of Louisville (U of L) cardiologist and researcher Roberto Bolli, MD. The award, which is the chapter’s highest honor, recognizes achievements in the field of cardiology and medicine, as well as leadership in the regional and national cardiology community, mentorship, charity work, and vigilant care of the sick.

In 2017, Bolli received a $13.8 million research grant from the National Institutes of Health to study a revolutionary treatment of heart disease, which focuses on repairing the heart and curing heart failure using a patient’s own stem cells. Last year, at the annual meeting of the American Heart Association in Anaheim, California, Bolli led the Stem Cell Summit.

Bolli also serves as editor of the journal Circulation Research. This official journal of the American Heart Association is considered the world’s leading journal on basic and translational research in cardiovascular medicine.

Within the community, Corbett currently serves as chairs of both the Kentucky Arts Council and Leadership Kentucky board of directors. Additionally, she is a member of the Judicial Nominating Commission for the Appellate and Supreme Courts of Kentucky and the Rotary Club of Louisville.

“It is both an honor and privilege to be entrusted with the role of president at Baptist Health La Grange,” said Kaho. “I’m fortunate to be joining a team that demonstrates its commitment to the care of our patients and the overall health and well-being of our community on a daily basis. As a resident of Oldham County, I’m looking forward to now being an integral part of continuing and growing the Baptist Health mission and vision to the community I call home.” 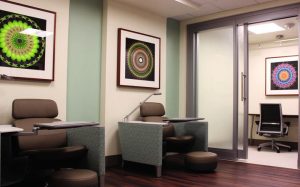 LEXINGTON To meet Kentucky’s growing need, in December of 2017, the University of Kentucky Markey Cancer Center unveiled a new inpatient floor occupying the Albert B. Chandler Hospital Pavilion A, with units in each tower.

“For more than thirty years, Markey has been providing exceptional cancer care to the citizens of Kentucky, and our patient volume has increased dramatically in the past several years,” says Dr. Mark Evers, director of the UK Markey Cancer Center. “This is the first time we>ve been able to expand clinical care into new space. We are thrilled to open up this state-of-the-art facility for our inpatients, which has been specifically designed to cater to the needs of our patients and staff alike.”

Located on the 11th floor of Tower 100, the James and Gay Hardymon Patient Care Unit is a 31-bed unit for medical and surgical oncology patients. In Tower 200, the 32-bed Darley Blood and Marrow Transplantation Unit will house patients who have undergone a bone marrow transplant, as well as patients with blood cancers. Between the two units, eight new cancer inpatient beds have been added.

In order to facilitate a multidisciplinary approach to care, the floor contains conference spaces where a wide array of specialists can meet and discuss the patient as a team. In addition, to minimize the time spent away from the patient’s bedside, each room is equipped with a nurse work station right outside the door. The new rooms are also substantially larger, and many have expansive windows to provide natural light and outdoor views.

Additionally, the two units boast the family comfort center, which provides an area for families to congregate outside the clinical space; a workstation-equipped business center where patients and family can fulfill job responsibilities; and the family suite, a hotel-style room directly connected to a patient room. For a nominal fee, loved ones can live here throughout the patient’s stay

To further enhance their treatment experience, patients on the new floor will have access to both oncology rehabilitation and integrative medicine services, including pet therapy, art therapy, music therapy, and narrative medicine.

“Some of our patients may stay between twenty and forty days as an inpatient,” says Dr. Gerhard Hildebrandt, division chief of hematology and blood and marrow transplant for Markey. “The new floor lets patients feel more at home. If you’re away from your family and you undergo such aggressive treatment, it’s important that you have an environment where you feel very comfortable.”

LOUISVILLE. The National Human Trafficking Resource Center Hotline documented 8,042 cases of reported trafficking in 2016. With these statistics, it imperative healthcare professionals know how to spot the signs and intervene. So, along with Harvard University and the University of South Florida, the University of Louisville (U of L) has developed and initiated a curriculum designed to help future health care professionals recognize victims of human trafficking.

“One survey shows that sixty-three percent of HCPs, including physicians, nurses, social workers and physician assistants, did not have training on how to identify and intervene in human trafficking situations,” says Olivia F. Mittel, MD, associate professor of pediatrics at U of L and Norton Children’s Hospital. “Providers must be educated about the issue of trafficking, including how to recognize it in the clinical setting.”

To prepare students to identify the signs of human trafficking and know how to best intervene, the U of L School of Medicine developed a curriculum that includes a forensic medicine lecture to impart basic facts; online learning; medical documentation; and standardized patient-based simulations, in which an adolescent female patient presents with the common characteristics of a victim of human trafficking.

“We want to ensure that all students receive the training,” Carrie A. Bohnert, MPA., director of the standardized patient program at U of L says. “Every medical student, regardless of their chosen specialty, must be able see human trafficking when it presents and intervene for the victim.”

The initial project was implemented over a 16-month period, and the data gained is now being thoroughly evaluated and shared. Along with Hanni Stoklosa, MD, of Harvard University and Michelle Lyman, a student at the University of South Florida’s Morsani College of Medicine, Mittel and Bohnert compiled their research in a paper titled, “Medical Education and Human Trafficking: Using Simulation,” which was recently published in Medical Education Online.